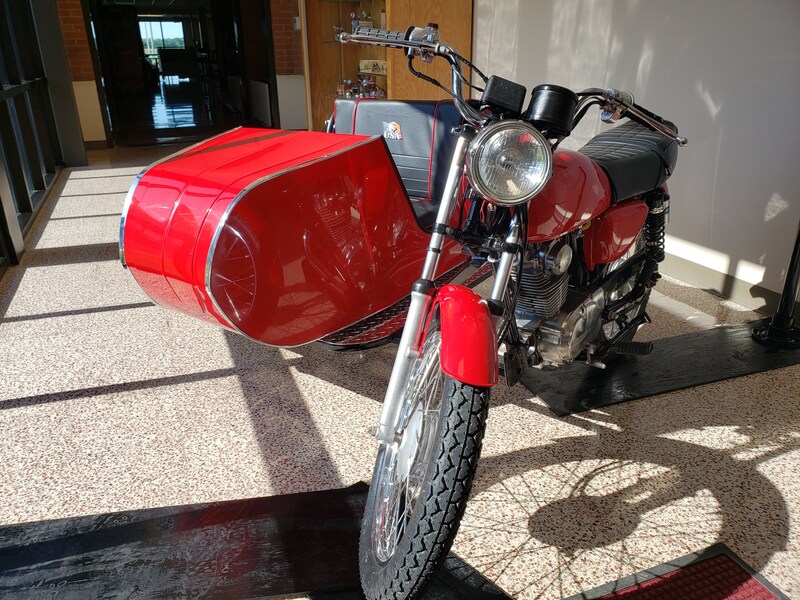 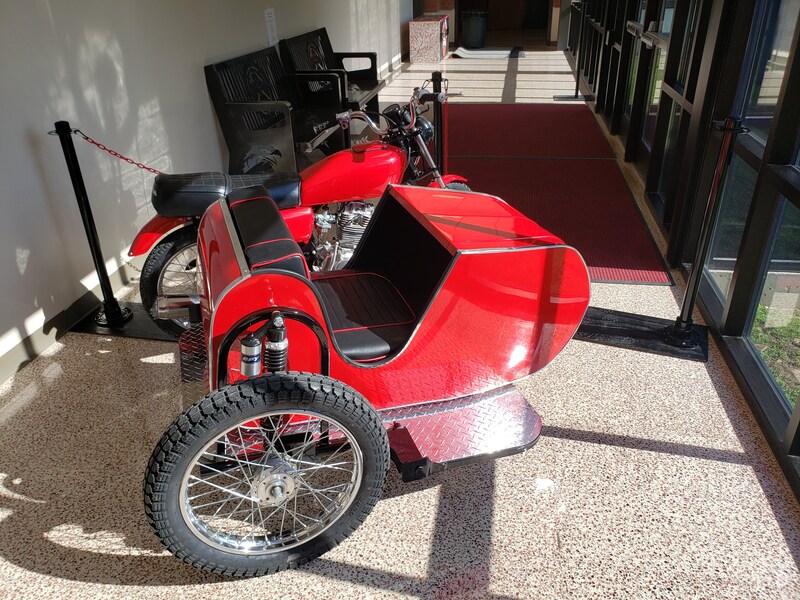 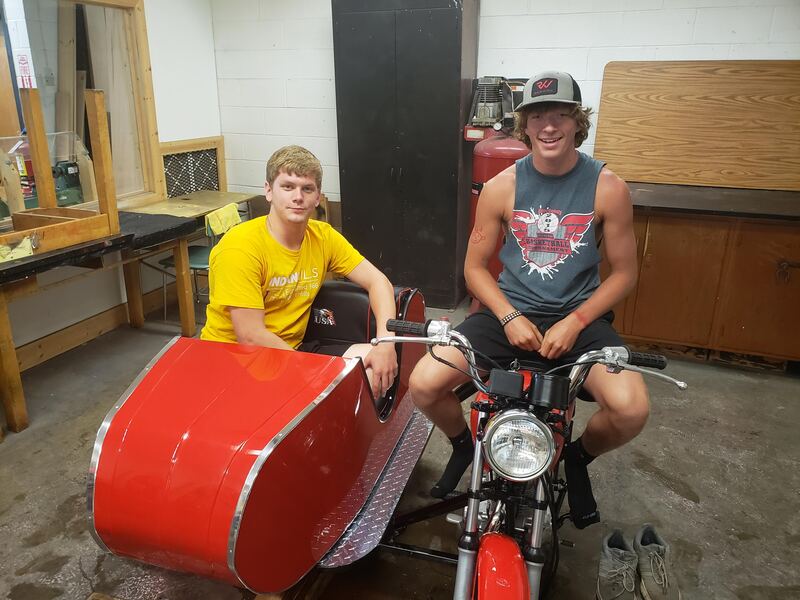 Click here for slide show
The Sidecar​
By: Mr. Green

The Small Engines class had a very busy and exciting year. It started off like normal with students working on getting their certifications with Briggs and Stratton, Kohler, and Stihl. Students attaining these three certifications are: Andrew Howe, Trent Klocke, Carter Marble, Braydon Miller, Patrick Ogden, Zach Jansen, Zack Schrage, Nick Hamlin, Elijah Ward, Jared Peavler, and Jacob Becker. This means they are certified master technicians with Briggs and Stratton, Kohler and they have their Bronze certification with Stihl two-cycle.  But once they had all this behind them things really took off. A couple years ago we had two Honda CB125’s donated. So Zach Jansen wanted to rebuild one and I suggested we turn the other into the department show bike that we can take around to parades and car shows. And as boys are they got to feeding off each other and before long they decided the bike needed a sidecar. But before I allowed them to start on that I wanted to hear it run. Both bikes had a blown engine, so we ordered a new cylinder, piston, and any other normal wear items that needed replacing. Then on December 17th it came back to life. That really fired the boys up. The next day the shop resembled a chop shop. They had the bike completely dismantled and ready to strip and clean in one class period. It was cool to watch the enthusiasm with these boys. From then until Christmas break the class worked on restoring the old 1980 Honda while Zach Jansen and Zack Schrage worked on reviving his 1979 Honda. But things kept progressing even through Christmas break. Students were so excited about the project they were asking me if I could come in so they could start on the sidecar. So we started construction on Dec 26th and worked 3 days over break and on any snow days that followed. That's the level of excitement these boys had. But this was a great project that encompassed mechanics, restoration, autobody, and upholstery. The students built every part of the sidecar. Nick Hamlin, Carter Marble, and Patrick Ogden cut the vinyl and sewed it together to build the seat of the sidecar. Carter, Trent, and Patrick came in on the Valentine snowday to prime and paint the frame and all the black parts. From there we moved on to prepping all the parts that would be painted red. Nick Hamlin and Jeared Peavler began making the patch panel for the right side of the gas tank. It had a dent and a hole, so they cut out the bad and formed the patch with a mallet and sandbag. Once they had a perfect fit it was TIG welded in place and checked for leaks. From there they cleaned it with acid and recoated it in preparation for fuel. By this time Zach Jansen had his bike running and was working on repainting it while the others were cleaning, sanding and skim coating all the parts in preparation for red paint. This was the longest part of the journey for the boys. But I stressed to the boys that it was 98% preparation and 2% application when it comes to paint. So they sanded and skimmed and sanded and sanded some more. Unfortunately mid March came just after we had the final coat of primer on. On the bright side though they had both frames, the engine, and wheels assembled for display at the pancake breakfast. So after a hiatus some of the boys came back in June to finally make it shine. And shine it did. Trent Klocke painted the red parts, then he and Carter cut and polished everything to a showroom shine. Then came the excitement and nerves as they finished final assembly and cleaning just in time for graduation. To all the boys that worked on the bike I'm proud of you. You did an excelent job.